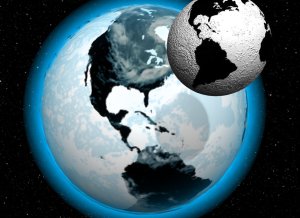 Zebra Earth with Zebra Moon, both inhabited by Zebra People

Toxic Future Earth with “don’t tread on me” graffiti on the moon….see we really did get to the moon! (observe that the clouds have moved between the first and second image)

My satellite jumped 50 billion years into the future to get that one! But don’t worry, in about 3 hours it should make it back through the black hole to our timeline so we can keep finding new earth-like planets.  Next time we’ll probably find some SUPER EARTHS!

Wow this is exciting!